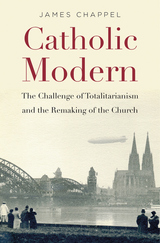 In 1900 the Catholic Church stood staunchly against human rights, religious freedom, and the secular state. According to the Catholic view, modern concepts like these, unleashed by the French Revolution, had been a disaster. Yet by the 1960s, those positions were reversed. How did this happen? Why, and when, did the world’s largest religious organization become modern?

James Chappel finds an answer in the shattering experiences of the 1930s. Faced with the rise of Nazism and Communism, European Catholics scrambled to rethink their Church and their faith. Simple opposition to modernity was no longer an option. The question was how to be modern. These were life and death questions, as Catholics struggled to keep Church doors open without compromising their core values. Although many Catholics collaborated with fascism, a few collaborated with Communists in the Resistance. Both strategies required novel approaches to race, sex, the family, the economy, and the state.

Catholic Modern tells the story of how these radical ideas emerged in the 1930s and exercised enormous influence after World War II. Most remarkably, a group of modern Catholics planned and led a new political movement called Christian Democracy, which transformed European culture, social policy, and integration. Others emerged as left-wing dissidents, while yet others began to organize around issues of abortion and gay marriage. Catholics had come to accept modernity, but they still disagreed over its proper form. The debates on this question have shaped Europe’s recent past—and will shape its future.
REVIEWS
James Chappel has written a masterful accounting of one of the most perplexing questions in modern European history. It will be required reading for anyone interested in understanding the transition from dictatorship to democracy among hundreds of millions of European Catholics in the span of mere decades.', Richard Steigmann-Gall, author of The Holy Reich: Nazi Conceptions of Christianity, 1919–1945

'This carefully researched and lucidly written history demonstrates how Catholic social thought shaped central features of ‘secular’ Western European states in the twentieth century, including the development of pro-familial welfare states and a ‘European’ variety of capitalism. Its transnational approach to developments that are all too often treated within a single national frame lends new insight into Europe’s Catholic modernity.', Judith Surkis, author of Sexing the Citizen: Masculinity and Morality in France, 1870–1920

'Over the past century, the Catholic Church has undergone a dramatic transformation. Shedding its former hostility to social pluralism and political democracy, it has adapted itself to new patterns of societal organization that we now characterize as modern. In his capacious and richly populated history of the European Catholic laity, James Chappel provides an excellent survey of the intellectual and ideological debates that contributed to this epic transformation.', Peter E. Gordon, author of Adorno and Existence

'The past century posed unexpected dangers to Catholics’ immortal souls: fascism and socialism, and then liberalism, with its enticements to question things never questioned and enjoy things never enjoyed. In his wholly original and pathbreaking book Chappel takes us to the heart of their predicament, reminding us that it was neither simply historical nor European, but remains with the Church everywhere it faces the challenges of modernity.', John Connelly, author of From Enemy to Brother: The Revolution in Catholic Teaching on the Jews, 1933–1965

'Chappel skillfully explores how, why, and when the Catholic church became modern.', Publishers Weekly