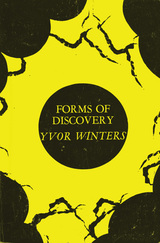 Forms of Discovery: Critical and Historical Essays on the Forms of the Short Poem in English
by Yvor Winters
Ohio University Press, 1967
Paper: 978-0-8040-0119-9
With Forms of Discover, Yvor Winters completes his critical canon. The distinguished poet-critic defines by analysis and example the development of the method that he has called “post-Symbolist.”

Starting with the styles of the English Renaissance, Winters discusses at length the felicities and shortcomings of these traditions, the main defect being that sensory imagery was little more than ornament. This sets the problem: to discover a style wherein both the conceptual and the perceptual are given their fullest expression

In the work of Charles Churchill, Winters explores the development of a complexly controlled associational procedure. Here is a richly varied conceptual method, though the sensory is still almost totally absent.

Churchill’s methods and those of the Renaissance masters are then contrasted with the work of the Romantics, who wrote a great deal about nature without bothering to look at it, and whose most lasting contribution would appear to be pathetically sentimental fallacies.

The turn of the century, in France, Britain, and America, sees the beginning of the post-Symbolist methods, while Yeats continues the retrograde movement of the Romantics. It is in the work of poets like Tuckerman, Hardy, Bridges, Stevens, T. Sturge Moore, and Paul Valéry that rational discourse combines richly with the perceptual universe in which we live: the particular perception is enhance by reference to general concepts, the general given substance by the particular exemplifying it.

The post-Symbolist methods result in a poetry that unifies the diverse fields of human experience and employs all aspects of language.

Style in Winters’ sense is not simply a way of gracefully combining words. It is the way a man lives, the method or art wherein he discovers to the best of his ability the real nature of the world in which he lives. It is in this sense that Forms of Discovery is a philosophical work, not a miscellaneous collection of essays; this book is, as Winters remarks, “an act of piety, not an act of destruction.”
AUTHOR BIOGRAPHY
Yvor Winters (1900-1968) was a poet, critic, and Stanford University professor of English literature. He won the Bollingen Prize in 1961.