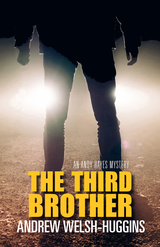 It’s a violent encounter that private investigator Andy Hayes could have done without. One minute he’s finishing up some grocery shopping ahead of a custody visit with his sons. The next, he must come to the rescue of a Somali American mother and her young children as anti-immigrant bullies torment them.

Grateful for his intervention, the Somali community hires Andy to find a missing teenager who vanished without a trace and is now accused of plotting a terror attack in his adopted hometown of Columbus, Ohio. The government is certain that nineteen-year-old Abdi Mohamed followed in the footsteps of his brother, who died in Syria a few months earlier in a jihadi assault. But Mohamed’s family isn’t convinced, describing a soccer-loving American kid who renounced his brother’s actions and planned to attend college in the fall and become a diplomat someday.

Soon Andy is fending off fed-up FBI agents and dueling with a mysterious foe with links to the white supremacist movement. As he draws ever closer to the truth behind Mohamed’s disappearance, Hayes stumbles onto a conspiracy that could put hundreds of lives in danger, including his own two boys.

Andrew Welsh-Huggins covers criminal justice issues for The Associated Press in Columbus, Ohio. He is the author of six Andy Hayes mysteries: Fourth Down and Out, Slow Burn, Capitol Punishment, The Hunt, The Third Brother, and Fatal Judgment. He also wrote No Winners Here Tonight: Race, Politics, and Geography in One of the Country’s Busiest Death Penalty States and Hatred at Home: Al-Qaida on Trial in the American Midwest, both from Ohio University Press.