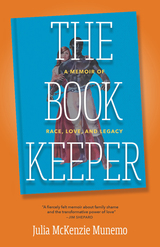 “A fiercely felt memoir about family shame and the transformative power of love even as it’s also an ongoing meditation on privilege and race in twenty-first-century America. This is a debut striking in its empathetic imagination, observational acuity, and emotional intelligence.” — Jim Shepard, author of Like You’d Understand, Anyway.

In a memoir that’s equal parts love story, investigation, and racial reckoning, Munemo unravels and interrogates her whiteness, a shocking secret, and her family’s history.

Julia McKenzie Munemo went to Bard College before earning a master’s in education at Harvard. After building a career as a freelance writer, she earned an MFA in creative nonfiction from the Stonecoast Program at the University of Southern Maine. She lives with her family in western Massachusetts.