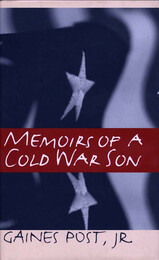 In 1951 Gaines Post was a gangly, bespectacled, introspective teenager preparing to spend a year in Paris with his professorial father and older brother; his mother, who suffered from extreme depression, had been absent from the family for some time. Ten years later, now less gangly but no less introspective, he was finishing a two-year stint in the army in West Germany and heading toward Oxford on a Rhodes scholarship, having narrowly escaped combat in the Berlin crisis of 1961. His quietly intense coming-of-age story is both self-revealing and reflective of an entire generation of young men who came to adulthood before the Cuban Missile Crisis and the Vietnam War.

Post's experiences in high school in Madison, Wisconsin, and Paris, his Camus-influenced undergraduate years at Cornell University, and his army service in Germany are set very effectively against the events of the Cold War. McCarthyism and American crackdowns on dissidents, American foreign and military policy in Western Europe in the nuclear age, French and German life and culture, crises in Paris and Berlin that nearly bring the West to war and the Post family to dissolution—these are the larger scenes and subjects of his self-disclosure as a contemplative, conflicted "Cold War agnostic."

His intelligent, talented mother and her fragile health hover over Post's narrative, informing his hesitant relationships with women and his acutely questioning sense of self-worth. His story is strongly academic and historical as well as political and military; his perceptions and judgments lean toward no ideological extreme but remain true to the heroic ideals of his boyhood during the Second World War.

AUTHOR BIOGRAPHY
Gaines Post received his Ph.D. in European history from Stanford University in 1969. He is professor emeritus of history at Claremont McKenna College.
REVIEWS
“One of the best books I've read in a good while…clear-eyed, thoughtful, honest, and often very moving. As one of the same generation as the author, I found myself saying again and again, yes, this is how it was back then—back when we were inside that extremely different time.”—David McCullough


“This beautifully written memoir offers a historian's incisive perspective on the cold war years…Post interweaves autobiography and history with great charm and wit to produce an engaging account of the post-World War II generation.”—James M. McPherson


“Gaines Post's Memoirs of a Cold War Son views an almost forgotten era in recent American history. He makes us remember what young Americans were like in postwar Paris, how they felt about the Berlin crisis and the building of the wall…An important historical record.”—Jill Ker Conway