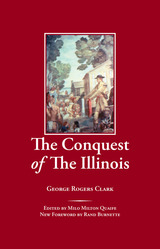 Written only a decade after George Rogers Clark’s conquest of Illinois, this firsthand account shows the region as it existed in the 1770s, explains how British occupation affected Kentucky settlers, and exhibits Clark’s enormous diplomatic skills in convincing the French settlers and Indians along the rivers of Illinois that they were better off under the jurisdiction of the Americans rather than the British. In his new foreword to this book, Rand Burnette refers to Clark as a psychologist and an expert in human relations.

Believing the British responsible for Indian raids on the people of Kentucky, Clark determined to capture that area, which was claimed by his home state of Virginia. “His plan, which he presented to Governor Patrick Henry,” Burnette notes, “was to take possession of the Illinois country by defeating the British at Kaskaskia, win the support of the French in that area, and thus control both the Mississippi and the Ohio Rivers. The British support of the Indians, who raided the Kentucky settlements from the Illinois country, would be at an end.”

Clark’s stirring narrative—written between 1789 and 1791 and covering 1773–1779—chronicles the events in the Old Northwest in the second half of the eighteenth century. Life on the frontier was dangerous and uncertain at this time. As Clark points out and Milo Milton Quaife underlines in his footnotes, death came to many at the hands of Indians or in military battles and skirmishes.

First published in 1920 and long out of print, the Quaife edition of Clark’s The Conquest of The Illinois reprinted here is for the modern reader superior to the original. First, Quaife provided an index. Equally important for modern readers, he standardized Clark’s spelling. (Clark had little formal education, and his spelling was even more eccentric than that found in a typical eighteenth-century account.) Finally, Quaife’s footnotes often include biographical sketches of the people in the book.

Rand Burnette is chair of the Department of History at MacMurray College in Jacksonville, Illinois.