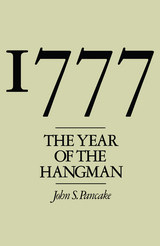 No one who has read the history of the War of Independence can fail to be fascinated by the campaign of Gentleman Johnny Burgoyne. The story evokes pictures in the mind's eye: scarlet-coated Englishmen; the green and blue uniforms of the German mercenaries; the flash of brass and silver and steel accoutrements; the swarms of Indians in their war paint; the whole moving through the green forests or sailing the blue waters of lakes and riv­ers. Even the names have a lyrical tone: Richelieu, Champlain, Oriskany, Ticonderoga, and La Chine.

Part of this fascination is the fact that the fate of the expedition marked a turning point in the history of the war. It is not surprising that there has been a host of chroniclers, scholars, and novelists, and those who fall in a category somewhere between because their artistry bridges the gaps that footnoted facts cannot, and so allows some scope for imagination (and may teach more history than the rest).

This fascination was partly responsible for Pancake’s exploration of this particular part of the history of the war. There was also the fact that no scholar since Hoffman Nickerson in his Turning Point of the Revolution (1926) has attempted a detailed study of the British invasion from Canada, although there has been a vast amount of literature on specific as­pects of the campaign. No study to date has attempted to link the Canadian expedition to the concurrent operation of General Sir William Howe in Pennsylvania in such a way as to present a complete story of the campaign of 1777. From the point of its inception and launching by the American Secretary, Lord George Germain, to the point where it was reduced to a shambles at the end of the year.
AUTHOR BIOGRAPHY
John S. Pancake (1920-1986) was a native of Virginia, Professor of History at The University of Alabama, and author of studies on Thomas Jefferson and Alexander Hamilton.
TABLE OF CONTENTS