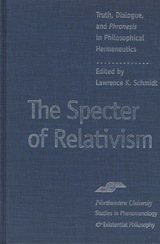 Specter of Relativism addresses the timely topic of relativism from the perspective of Gadamer's hermeneutics. This collection of essays explores several of the key issues in contemporary philosophy—the nature of truth, the model of conversation, and the possibility of an ethics in postmodern conditions—in the context of the work of Gadamer. Although centered on Gadamer and including the first English translation of one of his essays, the volume does not narrowly define or defend the approach of philosophical hermeneutics; the contributors present a broad range of views, in some cases championing a Gadamerian perspective, in others challenging it.
REQUEST ACCESSIBLE FILE