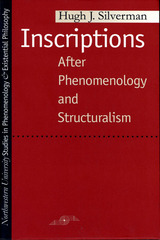 Inscriptions: After Phenomenology and Structuralism
by Hugh J Silverman
Northwestern University Press, 1997
Paper: 978-0-8101-1496-8
Positioning itself within the Continental tradition, Inscriptions is an interwoven set of investigations into the differences between phenomenology and structuralism, and a cohesive and thoroughgoing inquiry into the contemporary status of Continental philosophy.

In Inscriptions, Hugh J. Silverman investigates two divergent yet related philosophical movements: phenomenology from the later Husserl through Sartre and Heidegger to Merleau-Ponty, and structuralism from de Saussure through Levi-Strauss and Lacan to Barthes. This reading of the tradition culminates in an assessment of Derrida and Foucault. From this foundation, Silverman moves beyond structuralism and phenomenology, and develops his own philosophical position in the context of semiotics, hermeneutics, and deconstruction. A new preface by the author updates this classic text.
AUTHOR BIOGRAPHY
HUGH J. SILVERMAN is Professor of Philosophy and Comparative Literature at the State University of New York at Stony Brook. He is also Executive Director of the International Association for Philosophy and Literature.
TABLE OF CONTENTS


Preface to the 1997 edition
Preface: inscribing the place between
Acknowledgments
Introduction: Continental philosophy in America

I. Phenomenology
1. The self in Husserl's Crisis
2. Dasein and existential ambiguity
3. The identity of difference
4. Thinking and being: the essential relation
5. Merleau-Ponty's human ambiguity

IV. The Difference Between (and Beyond)
16. The limits of logocentrism
17. Self-decentering: Derrida incorporated
18. Foucault and the anthropological sleep
19. From utopia/dystopia to heterotopia: an interpretive topology
20. For a hermeneutic semiology of the self