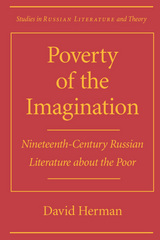 The primal scene of all nineteenth-century western thought might involve an observer gazing at someone poor, most commonly on the streets of a great metropolis, and wondering what the spectacle meant in human, moral, political, and metaphysical terms. For Russia, most of whose people hovered near the poverty line throughout history, the scene is one of special significance, presenting a plethora of questions and possibilities for writers who wished to depict the spiritual and material reality of Russian life. How these writers responded, and what their portrayal of poverty reveals and articulates about core values of Russian culture, is the subject of this book, which offers a compelling look into the peculiar convergence in nineteenth-century Russian literature of ideas about the poor and about the processes of art.
AUTHOR BIOGRAPHY
David Herman is an associate professor in the department of Slavic Languages and Literatures at the University of Virginia.
TABLE OF CONTENTS
Contents
Acknowledgments
Introduction: Poverty and Imagination
Chapter One - Expelled from the Garden of Poverty: Sympathy and Literacy in “Poor Liza”
Chapter Two - The Call of Poverty: Learning to Love the Low in “Egyptian Nights”
Chapter Three - The Meaning of Poverty: Gogol’s Petersburg Tales
Chapter Four - Gogol against Sympathy
Chapter Five - “The Poverty of Our Literature”
Chapter Six - By His Poverty: Dostoevsky and the Imitations of Christ
Conclusion: The Wealth of the Russian Imagination
Notes
Bibliography
Index
REQUEST ACCESSIBLE FILE