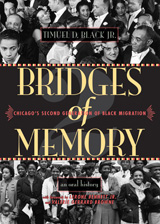 In the second volume of Bridges of Memory, historian Timuel D. Black Jr. continues his conversations with African-Americans who migrated to Chicago from the South in search of economic, social, and cultural opportunities. With his trademark gift for interviewing, Black-himself the son of first-generation migrants to Chicago-guides these individual discussions with ease, resulting in first-person narratives that are informative and entertaining.

Picking up where the first book left off, volume 2 introduces the reader to more members of the first wave of migration and also members of the second generation, the children of those who came in the first wave. In telling their stories, the interviewees paint a vivid picture of the thriving and tight-knit Chicago community formerly known as the Black Belt—today's historic Bronzeville neighborhood. They bring to life the role of family, religion, business, music, and, most of all, the hopes, dreams, and perseverance that enabled a group of people to establish a successful community within a larger society that seemed determined to keep them from success. The experiences of these diverse and vivid personalities often illustrate the role that racial prejudice has played in shaping the specific arcs of their lives. But personal histories such as these are not just chronicles of frustration and despair; more important these narratives reveal an unwavering dedication to breaking the color line and a tireless pursuit of their right to the promise of America.
AUTHOR BIOGRAPHY
Timuel D. Black Jr. is a prominent civil rights activist and also professor emeritus of social sciences at the City Colleges of Chicago. Born in Birmingham, he moved to Chicago as a baby, and has lived here ever since.
REVIEWS

"Black has captured the voices of the near past, and they tell a story as contemporary as our own: that success only comes with struggle, that progress is possible only when our history is both reflected and recognized in our contemporary lives."—Booklist

"[E]ven the casual reader. . .will delight in this invaluable resource."—Publishers Weekly