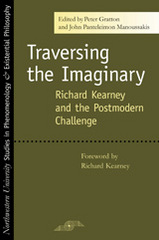 In recent years, Richard Kearney has emerged as a leading figure in the field of continental philosophy, widely recognized for his work in the areas of philosophical and religious hermeneutics, theory and practice of the imagination, and political thought. This much-anticipated--and long overdue--study is the first to reflect the full range and impact of Kearney's extensive contributions to contemporary philosophy.

The book opens with Kearney's own "prelude" in which he traces his intellectual itinerary as it traverses the three imaginaries explored in the volume: the dialogical, the political, and the narrative. The interviews that follow the first section allow readers to listen in on conversations between Kearney and some of the most interesting and respected thinkers of our time--Noam Chomsky, Charles Taylor, Jacques Derrida, Paul Ricouer, and Martha Nussbaum--as they reveal new and unexpected aspects of their thought on stories and mourning, ethics and narrative, terror and religion, intellectuals and ideology. The next section, on the political imaginary, looks at Kearney's distinctive contribution to the political situation in Ireland and in Europe more generally; and in the last, on narrative, writers including David Wood, Terry Eagleton, and Mark Dooley focus on Kearney's novels as instances of narrative theory put into literary practice. Concluding with Kearney's postscript, an essay on "Traversals and Epiphanies in Joyce and Proust," the volume comes full circle, encompassing the full extent of Richard Kearney's engagement and offerings as a philosopher,
AUTHOR BIOGRAPHY
Peter Gratton is a visiting lecturer in philosophy at Northeastern Illinois University and an adjunct professor of philosophy at DePaul University.

John Panteleimon Manoussakis is a visiting assistant professor of philosophy at Boston College and at the American College of Greece.
TABLE OF CONTENTS