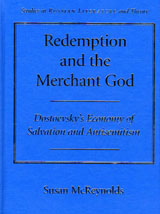 Dostoevsky’s Russian chauvinism and anti-Semitism have long posed problems for his readers and critics. How could the author of The Brothers Karamazov also be the source of the slurs against Jews in Diary of a Writer? And where is the celebrated Christian humanist in the nationalist outbursts of The Idiot? These enigmas—the coexistence of humanism and hatred, faith and doubt—are linked, Susan McReynolds tells us in Redemption and the Merchant God. Her book analyzes Dostoevsky’s novels and Diary to show how the author’s anxieties about Christianity can help solve the riddle of his anti-Semitism as well as that of his Russian messianism.

McReynolds’ reading demonstrates Dostoevsky suffered from a profound discomfort with the crucifixion as a vehicle for redemption. Through his work, she traces this ambivalence to certain beliefs and values that Dostoevsky held consistently throughout his life. And she reveals how this persistent ambivalence about the crucifixion led Dostoevsky to project what he didn’t like about Christianity onto the Jews—and to invest those aspects of the crucifixion that he could approve with the “Russian idea.”

A radical rereading of one of the Western canon’s most revered and perplexing authors, McReynolds’ book is also a major reconfiguring of Dostoevsky’s intellectual biography and a significant contribution to literary and cultural studies.

SUSAN MCREYNOLDS is an associate professor of Slavic languages and literatures at Northwestern University.  She is currently editing a new Norton Critical Edition of The Brothers Karamazov.

"Can we read Dostoevsky without worrying about his Antisemitism? Susan McReynolds makes a convincing case that we cannot. She places Dostoevsky's Jewish obsession at the center of his imagination. No one with an interest in Dostoevsky or in the history of his era should ignore this compelling book." —Jeffrey Brooks, author of When Russia Learned to Read: Literacy and Popular Literature, 1861-1917

TABLE OF CONTENTS
Contents
Acknowledgments
Note on the Text
List of Abbreviations of Works by Fyodor Dostoevsky
Introduction: Speaking with the Devil
Part I
“I Am Not an Expert at Lulling to Sleep”: The Struggle Between Faith and Doubt in Dostoevsky’s Writings
“He Gave His Son”: The Problem of the Crucifixion as Child Sacrifice in Dostoevsky
Disraeli and the Merchant God: Victims and Villains, Jews and Europe
A Synagogue Mistaken for a Church: Dostoevsky’s Demon and the Jews
Part II
“I Have the Heart of a Lamb”: Roots of the Russian and Jewish Ideas and the Problem of the Crucifixion in Poor Folk
“God Sent Her to Us as a Reward for Our Sufferings”: The Origins of Dostoevsky’s Preoccupation with Child Sacrifice in the Dialogue Between Time and "The Insulted and Injured"
Sources of Dostoevsky’s Antisemitism in Notes from the House of the Dead: The Problem of Redemption and the Resemblance of Christians and Jews
“I Don’t Want Your Sacrifice”: The Morality of the Son in Crime and Punishment
From Prince Christ to the Russian Christ: Problems of Resurrection in The Idiot and the Development of Dostoevsky’s National Messianism
“This Is What I Cannot Bear”: The Obliteration of Moral Distinctions Through the Crucifixion in Demons
“You Can Buy the Whole World”: Zosima’s Christian Faith and the Jewish Idea in the Diary of a Writer
Notes
Index
REQUEST ACCESSIBLE FILE