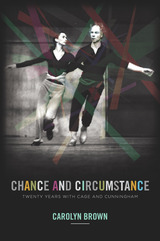 Chance and Circumstance: Twenty Years with Cage and Cunningham
by Carolyn Brown
Northwestern University Press, 2009
Paper: 978-0-8101-2513-1
Carolyn Brown, one of the most renowned dancers of the last half-century, lived at the center of New York's bold and vibrant artistic community, which included not only dancers and choreographers but composers and painters as well. Brown's memoir recounts her own remarkable twenty-year tenure with the Merce Cunningham Dance Company and provides a first-hand account of a pivotal period in twentieth-century art.
From the 1950s to the 1970s, Brown developed close relationships with musical director John Cage and set-designer Robert Rauschenberg and with Cunningham himself. Brown's memoir reveals the personal dynamics between the reserved and moody Cunningham and the playful and ebullient Cage, as well as the controversial yet undeniably brilliant creativity that resulted when the two collaborated. Brown relates the company's rise from its cash-strapped early years when the group traveled by VW bus to perform in small venues to the 1964 world tour that left the group exhausted but finally brought them large-scale acclaim.
A unique chronicle of the avant-garde's struggle for acceptance, Brown's memoir provides a riveting first-hand account of a little-documented era in modern dance that nonetheless had a tremendous impact on the course of art in the twentieth century.
AUTHOR BIOGRAPHY
Carolyn Brown continues to work with the Cunningham company as an artistic consultant. She is a member of the Cunningham Dance Foundation Board of Directors and has worked as a freelance choreographer, filmmaker, writer, lecturer, and teacher. She has been awarded the Dance Magazine Award, five National Endowment for the Arts grants, and a John Simon Guggenheim Fellowship. Her writing has been published in the New York Times, Dance Perspectives, Ballet Review, and the Dance Research Journal. She lives in Millbrook, New York.
TABLE OF CONTENTS