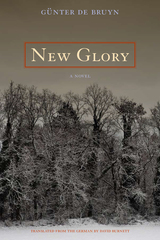 At the time New Glory (Neue Herrlichkeit) was published in 1984, most dissident authors had fled the German Democratic Republic, then in its final years. Günter de Bruyn courageously remained to satirize the regime from behind the Iron Curtain. He is a popular writer and cultural commentator in unified Germany.

New Glory tells the story of Viktor Kösling, a privileged young man from the GDR about to embark on a diplomatic career. He retreats to "New Glory," a state-run resort in rural Brandenburg run by a corrupt director, to finish his dissertation on "The Foreign Policy of the Prussian Government During the French Revolution with Particular Emphasis on the Effects of Artisan and Peasant Unrest in the Provinces." While there he falls, against his parents’ wishes, for the lisping chambermaid, Thilde. The complex drama that follows, which pays tribute to Mann’s The Magic Mountain and its ironic view of human nature, exposes the moral weakness of Viktor’s character and the farcical distance between official East German ideals and the opportunistic functionaries who enabled the system.

AUTHOR BIOGRAPHY
Günter de Bruyn was born in Berlin in 1926. After surviving a battle on the Eastern Front in 1945, he returned on foot to East Berlin, where he remained throughout the German Democratic Republic's forty-year existence. Widely respected for maintaining his artistic integrity during this period, he continues to enjoy great popularity in Germany today.

David Burnett is a translator living in Leipzig, Germany.