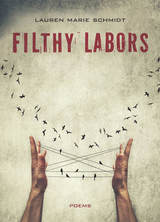 In Filthy Labors, Lauren Marie Schmidt draws on personal observations from her position as a poetry teacher at a shelter for homeless mothers, as well as her own roles as daughter and sister through times of family turmoil. She condemns the indignities suffered by the poor and the powerless and praises the work of those who do the caretaking. Here is poetry in the great tradition of social justice literature going back to Walt Whitman. Organized around the Catholic sacraments, these poems call upon Whitman directly, for his words replace the liturgical text of these rituals to rejoice in the redemptive power of poetry in the absence of religion’s saving grace.
AUTHOR BIOGRAPHY
LAUREN MARIE SCHMIDT is the author of three other collections of poetry: Two Black Eyes and a Patch of Hair Missing; The Voodoo Doll Parade, selected for the Main Street Rag Author’s Choice Chapbook Series; and Psalms of the Dining Room, a sequence of poems about Schmidt’s volunteer experience at a soup kitchen in Eugene, Oregon. Her work has appeared in journals such as North American Review, Alaska Quarterly Review, Rattle, Nimrod, Painted Bride Quarterly, PANK, New York Quarterly, Bellevue Literary Review, and The Progressive, among others. Her awards include the So to Speak Poetry Prize, the Neil Postman Award for Metaphor, the Janet B. McCabe Poetry Prize, and the Bellevue Literary Review' s Marica and Jan Vilcek Prize for Poetry.
TABLE OF CONTENTS


Part I. Holy Orders
In Defense of Poetry

Part II. Penance
Paterson
How We Go
The Mother Called Meh-lay-gross
The English Teacher Gets a Lesson in Inference
The Truth about Dionna
The Room Toss Villanelle
Ladies’ Day at the Playhouse
Bastard Ghazal for the Death of SNAP
Welfare Mothers

Part III. Holy Orders
Unto Others

Part IV. Anointing of the Sick
My Father Asks Me to Kill Him
The Christmas Gift
Never Too Late for Amazement
Grandpa’s 70th Birthday
The Nursing Home
Silver Alert
Second Drink
Exercises in Mourning
Part V. Baptism
The Box Marked “F”
What I Learned About My Father I Learned One Day
at the Beach in 1986
Daughter
Memorial Park
My Parents’ New House, One Year After Hurricane Sandy
Inheritance
4

Part VI. Confirmation
One Among the Miscreants
Faith
Mother Teresa, Our Dearly Beloved Mother
The Rapture
‘Til Death
Before Grief
Initiations
Parany
The Fourth of July
On Route 208