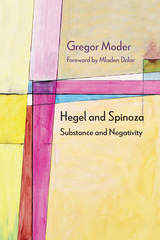 Gregor Moder’s Hegel and Spinoza: Substance and Negativity is a lively entry into current debates concerning Hegel, Spinoza, and their relation. Hegel and Spinoza are two of the most influential philosophers of the modern era, and the traditions of thought they inaugurated have been in continuous dialogue and conflict ever since Hegel first criticized Spinoza. Notably, eighteenth- and nineteenth-century German Idealists aimed to overcome the determinism of Spinoza’s system by securing a place for the freedom of the subject within it, and twentieth-century French materialists such as Althusser and Deleuze rallied behind Spinoza as the ultimate champion of anti-Hegelian materialism. This conflict, or mutual rejection, lives on today in recent discussions about materialism. Contemporary thinkers either make a Hegelian case for the productiveness of concepts of the negative, nothingness, and death, or in a way that is inspired by Spinoza they abolish the concepts of the subject and negation and argue for pure affirmation and the vitalistic production of differences.

Hegel and Spinoza traces the historical roots of these alternatives and shows how contemporary discussions between Heideggerians and Althusserians, Lacanians and Deleuzians are a variation of the disagreement between Hegel and Spinoza. Throughout, Moder persuasively demonstrates that the best way to read Hegel and Spinoza is not in opposition or contrast but together: as Hegel and Spinoza.
AUTHOR BIOGRAPHY
GREGOR MODER is an assistant professor on the Faculty of Arts at the University of Ljubljana.
TABLE OF CONTENTS