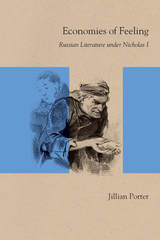 Economies of Feeling offers new explanations for the fantastical plots of mad or blocked ambition that set the nineteenth-century Russian prose tradition in motion. Jillian Porter compares the conceptual history of social ambition in post-Napoleonic France and post-Decembrist Russia and argues that the dissonance between foreign and domestic understandings of this economic passion shaped the literature of Nicholas I’s reign (1825 —1855).

Porter shows how, for Pushkin, Gogol, Dostoevsky, and Faddei Bulgarin, ambition became a staging ground for experiments with transnational literary exchange. In its encounters with the celebrated Russian cultural value of hospitality and the age-old vice of miserliness, ambition appears both timely and anachronistic, suspiciously foreign and disturbingly Russian—it challenges readers to question the equivalence of local and imported words, feelings, and forms.

Economies of Feeling examines founding texts of nineteenth-century Russian prose alongside nonliterary materials from which they drew energy—from French clinical diagnoses of “ambitious monomania” to the various types of currency that proliferated under Nicholas I. It thus contributes fresh and fascinating insights into Russian characters’ impulses to attain rank and to squander, counterfeit, and hoard. Porter’s interdisciplinary approach will appeal to scholars of comparative as well as Russian literature.
AUTHOR BIOGRAPHY
JILLIAN PORTER is an assistant professor of Russian in the Department of Germanic and Slavic Languages and Literatures at the University of Colorado Boulder.
TABLE OF CONTENTS