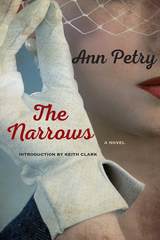 Link Williams is a handsome and brilliant Dartmouth graduate who tends bar due to the lack of better opportunities for an African American man in a staid mid-century Connecticut town. The routine of Link’s life is interrupted when he intervenes to save a woman from a late-night attack. Drinking in a bar together after the incident, “Camilo” discovers that her rescuer is African American and he learns that she is white. Unbeknownst to him, “Camilo” (actually Camilla Treadway Sheffield) is a wealthy married woman who has crossed the town’s racial divide to relieve the tedium of her life. Thus brought together by chance, Link and Camilla draw each other into furtive encounters that violate the rigid and uncompromising social codes of their own town and times.

As The Narrows sweeps ahead to its shattering denouement, Petry shines a harsh yet richly truthful light on the deforming harm that race and class wreak on human lives. In a fascinating introduction to this new edition, Keith Clark discusses the prescience with which Petry chronicled the ways tabloid journalism, smug elitism, and mob mentality distort and demonize African American men.
AUTHOR BIOGRAPHY
ANN PETRY (1908 –1997) was a reporter, pharmacist, social worker, and community activist. She illuminated the range of black and white experience in her novels, short stories, and other writing. Her book The Street was the first novel by an African American woman to sell more than a million copies.

KEITH CLARK is the author of The Radical Fiction of Ann Petry and Black Manhood in James Baldwin, Ernest J. Gaines, and August Wilson and the editor of Contemporary Black Men’s Fiction and Drama. He is a professor of English and African and African American Studies at George Mason University in Virginia.