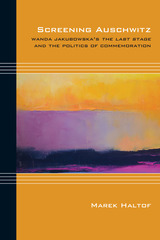 With its powerful dramatization of the camp experience, The Last Stage established several quasi-documentary themes easily discernible in later film narratives of the Shoah: dark, realistic images of the camp, a passionate moral appeal, and clear divisions between victims and perpetrators. Jakubowska’s film introduced images that are now archetypal—for example, morning and evening roll calls on the Appelplatz, the arrival of transport trains at Birkenau, the separation of families upon arrival, and tracking shots over the belongings left behind by those who were gassed. These and other images are taken up by a number of subsequent American films, including George Stevens’s The Diary of Anne Frank (1959), Alan Pakula’s Sophie’s Choice (1982), and Steven Spielberg’s Schindler’s List (1993).

Haltof discusses the unusual circumstances that surrounded the film's production on location at Auschwitz-Birkenau and summarizes critical debates surrounding the film’s release. The book offers much of interest to film historians and readers interested in the Holocaust.
AUTHOR BIOGRAPHY
MAREK HALTOF is a professor at Northern Michigan University. He has published several books in English and Polish on the cultural histories of Central European and Australian film. His recent books include Historical Dictionary of Polish Cinema; Polish Film and the Holocaust: Politics and Memory; The Cinema of Krzysztof Kieslowski: Variations on Destiny and Chance; and Polish National Cinema.
TABLE OF CONTENTS


List of Figures
List of Abbreviations
Acknowledgments
Introduction
1. The Auschwitz-Birkenau Number 43513
2. “Stalin Was Moved to Tears”: The Script
3. Return to Auschwitz: The Making of the Holocaust classic
4. The Film and Its Reception
5. Fighting Auschwitz: The Heroic Account of the Camp
6. Representation of the Holocaust in The Last Stage
7. The Legacy of Wanda Jakubowska
Notes
Bibliography
The Last Stage: Film Credits
Filmography: Wanda Jakubowska’s feature films
Index