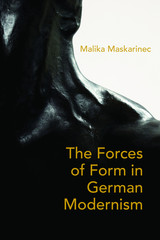 The Forces of Form in German Modernism charts a modern history of form as emergent from force. Offering a provocative alternative to the imagery of crisis and estrangement that has preoccupied scholarship on modernism, Malika Maskarinec shows that German modernism conceives of human bodies and aesthetic objects as shaped by a contest of conflicting and reciprocally intensifying forces: the force of gravity and a self-determining will to form. Maskarinec thereby discloses, for the first time, German modernism's sustained preoccupation with classical mechanics and with how human bodies and artworks resist gravity.

Considering canonical artists such as Rodin and Klee, seminal authors such as Kafka and Döblin, and largely neglected thinkers in aesthetics and art history such as those associated with Empathy Aesthetics, Maskarinec unpacks the manifold anthropological and aesthetic concerns and historical lineage embedded in the idea of form as the precarious achievement of uprightness.

The Forces of Form in German Modernism makes a decisive contribution to our understanding of modernism and to contemporary discussions about form, empathy, materiality, and human embodiment.
AUTHOR BIOGRAPHY
MALIKA MASKARINEC is the managing director of eikones: Center for the Theory and History of the Image at the University of Basel. She is the coeditor of Formbildung und Formbegriff: Das Formdenken der Moderne.
TABLE OF CONTENTS