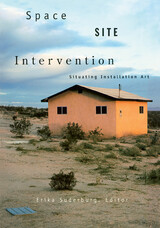 Space, Site, Intervention: Situating Installation Art
by Erika Suderburg
University of Minnesota Press, 2000
Paper: 978-0-8166-3159-9
Originally published in 1970, The Urban Revolution marked Henri Lefebvre’s first sustained critique of urban society, a work in which he pioneered the use of semiotic, structuralist, and poststructuralist methodologies in analyzing the development of the urban environment. Although it is widely considered a foundational book in contemporary thinking about the city, The Urban Revolution has never been translated into English—until now. This first English edition, deftly translated by Robert Bononno, makes available to a broad audience Lefebvre’s sophisticated insights into the urban dimensions of modern life.Lefebvre begins with the premise that the total urbanization of society is an inevitable process that demands of its critics new interpretive and perceptual approaches that recognize the urban as a complex field of inquiry. Dismissive of cold, modernist visions of the city, particularly those embodied by rationalist architects and urban planners like Le Corbusier, Lefebvre instead articulates the lived experiences of individual inhabitants of the city. In contrast to the ideology of urbanism and its reliance on commodification and bureaucratization—the capitalist logic of market and state—Lefebvre conceives of an urban utopia characterized by self-determination, individual creativity, and authentic social relationships.A brilliantly conceived and theoretically rigorous investigation into the realities and possibilities of urban space, The Urban Revolution remains an essential analysis of and guide to the nature of the city.Henri Lefebvre (d. 1991) was one of the most significant European thinkers of the twentieth century. His many books include The Production of Space (1991), Everyday Life in the Modern World (1994), Introduction to Modernity (1995), and Writings on Cities (1995).Robert Bononno is a full-time translator who lives in New York. His recent translations include The Singular Objects of Architecture by Jean Baudrillard and Jean Nouvel (Minnesota, 2002) and Cyberculture by Pierre Lévy (Minnesota, 2001).