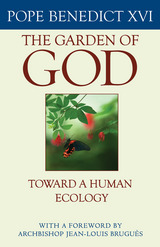 This book gathers together the audiences, addresses, letters, and homilies of Benedict on a wide-ranging set of topics that deal with the world about us. The major themes and connections he explores are creation and the natural world; the environment, science, and technology; and hunger, poverty, and the earth's resources.
TABLE OF CONTENTS
Contents
Foreword
Part 1. Creation and Nature
In Contact with Nature, Individuals Rediscover That They Are Creatures “Capable of God”
Creation Is a Gift So That It Might Become the Garden of God and Hence a Garden for Men and Women
Creation, with All of Its Gifts, Aspires Above and Beyond Itself
The Amazon River, a Fountain of Life
The “Ecology of Peace”
Man Has Received Creation So That He Might Implement God’s Plan
The Arctic: Mirror of Life
The Wonder of Creation and the Scars Which Mark the Surface of the Earth
What Air Is for Biological Life, the Holy Spirit Is for Spiritual Life
The Protection of Creation
The Keys to the Earth Are in the Hands of Man
Creation Is Marked by Finitude
If You Want to Cultivate Peace, Protect Creation
The Protection of Creation, an Element of Peace and of Justice
The Word of God and the Protection of Creation
In Contemplating Creation Man Has a Profound Sense of Gratitude and Recognition, but Also of Responsibility for Tilling and Keeping the Work of God
The World Is a Product of Creative Reason
The Earth Seen from Space Is Beautiful and Fragile
Human Ecology Is an Imperative Need
The Created World Is Not Merely a Scenario into Which God’s Saving Action Is Inserted, but Rather the Very Beginning of That Marvelous Action
Be Praised My Lord through All Your Creatures
Part 2. The Environment, Science, and Technology
The Harmony of Faith and Knowledge
Remembrance of the Twentieth Anniversary of the Tragedy at Chernobyl
Environment, Human Person, Spiritual Values: Three Challenges to Face in the Service of Justice Inspired by Charity
The Irresponsible Exploitation of the Environment Reflects an Inhumane Concept of Development
Scientific Knowledge and Technology Are Always Applied in Full Respect for International Rights
Strengthening the Alliance between Man and the Environment
Family, Human Community, and the Environment
New Men for a New World
Natural Law as a Guarantee against Manipulations and Abuses against Man
More Modest Lifestyles to Slow Down Environmental Degradation
The Use of Alternative Energies Contributes to Mankind’s Desire to Be Better Stewards of God’s Creation
Man Knows the Advantage That the Universe Has over Him; the Universe, Instead, Knows Nothing
Even the Decisions of Individuals, Families, and Local Administrations Are Fundamental for the Preservation of the Environment
Social Responsibility Means More Attention to the Needs of Workers, the Good of the Community, and the Respect of the Environment
Science as a Place of Dialogue, the Meeting between Man and Nature and Potentially Even between Man and His Creator
Unlimited Speculation Has a Negative Impact on the Environment and on Man Himself
Ecology of Man, Ecology of the Environment
The Church Must Encourage Governments to Protect the Fundamental Goods Which Are the Earth and Water
Part 3. Hunger, Poverty, and the Earth's Resources
Nourishing the World’s Population with Respect for Biodiversity
Without Solidarity between Countries There Is a Risk of Impeding the Work of International Organizations Committed to Fighting Hunger and Malnutrition
A New Europe Free from the Unique Form of “Apostasy” from Itself
When the Logic of Sharing and Solidarity Prevails It Is Possible to Direct the Course toward an Equitable and Sustainable Development
The Right to Food
Justly Administering the Fruits of Creation
Selfishness and Speculation as Obstacles to the Fight against Hunger
Fighting Poverty to Build Peace
An Equitable Access to the Earth’s Resources Should Be Guaranteed to Everyone
Integral Human Development in Charity and in Truth
An Integral Human Development to Give Voice to Every Nation
More Agricultural Investments in Poor Countries
For Development to Be Sustainable It Is Necessary to Aim at a Balance between Farming, Industry, and Services
The Farmer as a Model of a Mentality That Unites Faith and Reason
Adequate Food Concerns the Fundamental Right to Life
Agricultural Work as an Objective Strategy of Growth and Integral Development
Scriptural Index
General Index