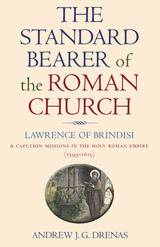 The Standard Bearer of the Roman Church examines the missionary work of the early modern Capuchin friar, and doctor of the Church, Lawrence of Brindisi. Renowned in his own day as a preacher, Bible scholar, missionary, chaplain, and diplomat, as well as vicar general of his order, Lawrence led the first organized, papally-commissioned Capuchin mission among the non-Catholics of Bohemia in the Holy Roman Empire from 1599 to 1602. He returned again under papal mandate, from 1606 to 1613. Andrew Drenas analyzes Lawrence’s evangelistic and polemical strategies in central Europe in order to shed light on some of the ways the Capuchins labored in religiously divided territories to confirm Catholics in their faith and to win over heretics. The introduction explains, principally, the book’s purpose and the historiographical background. After providing a brief biographical sketch of Lawrence’s life followed by details of his afterlife, Drenas examines Lawrence’s leading role in establishing the Capuchins’ new Commissariate of Bohemia-Austria-Styria in 1600, and specifically its first three friaries in Prague, Vienna, and Graz. From there the volume moves on to treat his preaching against heresy, followed by a focus on how Lawrence, while in Prague, involved himself directly in theological disputations with two different Lutheran preachers. The first dispute, with Polycarp Leyser, took place in July 1607, and dealt with good works and justification. The second, with a Lutheran whose identity remains unknown, and which occurred in August 1610, concerned Catholic veneration of the Virgin Mary. This is followed by an analysis of the Lutheranismi hypotyposis, or The Express Image of Lutheranism, Lawrence’s literary refutation of Lutheranism following additional contact with Polycarp Leyser in 1607. Finally, Drenas considers briefly the effectiveness of Lawrence’s apostolate and closes with a review of the book as a whole.
TABLE OF CONTENTS
Contents
List of Illustrations
Acknowledgments
List of Abbreviations
Introduction
1. Lawrence of Brindisi's Career and Afterlife
2. The Foundation of the Commissariate of Bohemia-Austria-Styria
3. Polemical Preaching
4. Theological Disputations
5. The Express Image of Lutheranism
Conclusion
Appendix A. Chronology of Lawrence of Brindisi's Career and Afterlife
Appendix B. Polemical Themes Addressed in Lawrence's Homiletic Works
Bibliography
Index