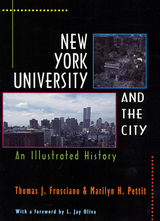 In New York University and the City, Thomas J. Frusciano and Marilyn H. Pettit situate the history of a unique urban university within the context of the social, political, and economic history of New York City. The authors trace the movement northward on Manhattan Island of both university and city, from the commercial hustle and bustle around City Hall, where the first classes were held in 1832, to the rural environs of Greenwich Village, and ultimately even farther north in 1894 to the undergraduate extension on the "secluded hilltop" of University Heights in the Bronx.

Vividly illustrated with both historical and contemporary images, New York University and the City explores various themes in the history of higher education and how NYU responded to changes in urban demographics, curriculum demands, and physical space during critical periods in the city's development. The relationship between university and city is further examined through extensive biographical portraits of the many historical personalities who made contributions to the development of both city and university.

The founding of New York University in 1831 is a watershed in the history of higher education in the United States. Albert Gallatin, former secretary of the treasury, led a group that proposed the creation of an institution of higher learning in New York City that would "correspond with the spirit and wants of the age and country," a nondenominational institution that would enlarge the opportunities of education for those qualified and inclined. NYU was expected to educate not only gentlemen scholars but also the sons of the great commercial metropolis. It also reflected and symbolized the aspirations of the city. By 1931, NYU was the nation's largest private university. Frusciano and Pettit chronicle the university's growth and struggles to its ultimate position as one of the most prestigious academic research institutions in the world.

MARILYN H. PETTIT was codirector of the Program in Archival Management at New York University and is currently university archivist at St. John's University. She has written variously about the history of New York City, notably about the connection between freedom and literacy as exemplified by African-American women in the early nineteenth century.
REVIEWS
Frusciano and Pettit have in word and picture evoked the special meaning New York has for New York University and that NYU has for New York. In a lively text surrounded by striking illustrations, they provide a history of the mix of extraordinary people, events, and policies devoted to the pursuit of a dream first announced in 1830: a distinctively urban university, devoted to scholarly excellence, committed to democratic opportunity. A wonderful urban story, wonderfully told.
— Thomas Bender, author of New York Intellect