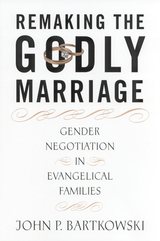 While religious leaders often have enormous influence over their members’ beliefs and how they translate their beliefs into action in everyday life, the individual family remains the place where religious values are practiced through and ultimately transferred to the next generation. As such, the family is an extremely important, though frequently overlooked, topic of study for sociologists of religion.

In Remaking the Godly Marriage, John Bartkowski studies evangelical Protestants and their views on marriage and gender relations and how they are lived within individual families. The author compares elite evangelical prescriptions for godly family living with the day-to-day practices in conservative Protestant households. He asks: How serious are the debates over gender and the family that are manifested within contemporary evangelicalism? What are the values that underlie this debate? Have these internecine disputes been altered by the emergence of new evangelical movements such as biblical feminism and the Promise Keepers? And given the fact that leading evangelicals advance competing visions of godly family life, how do conservative religious spouses make sense of their own family relationships and gender identities?

Through in-depth interviews with evangelical married couples and an exhaustive study of evangelical family advice manuals, Bartkowski explores the disputes and ambivalence concerning traditional gender roles and patriarchal models of family life, which derive from the tension between evangelical Protestantism as a religious subculture and the broader American secular culture in which it is embedded. Bartkowski reveals how evangelical men and women jointly negotiate gender roles within their families and selectively appropriate values of the larger culture even as they attempt to cope with the conflicting messages of their own faith.

AUTHOR BIOGRAPHY
John P. Bartkowski is an assistant professor in the department of sociology, anthropology, and social work at Mississippi State University.