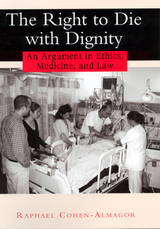 There are few issues more divisive than what has become known as “the right to die.” One camp upholds “death with dignity,” regarding the terminally ill as autonomous beings capable of forming their own judgment on the timing and process of dying. The other camp advocates “sanctity of life,” regarding life as intrinsically valuable, and that should be sustained as long as possible. Is there a right answer?

Raphael Cohen-Almagor takes a balanced approach in analyzing this emotionally charged debate, viewing the dispute from public policy and international perspectives. He offers an interdisciplinary, compelling study in medicine, law, religion, and ethics. It is a comprehensive look at the troubling question of whether physician-assisted suicide should be allowed. Cohen-Almagor delineates a distinction between active and passive euthanasia and discusses legal measures that have been invoked in the United States and abroad. He outlines reasons non-blood relatives should be given a role in deciding a patient’s last wishes. As he examines euthanasia policies in the Netherlands and the 1994 Oregon Death with Dignity Act, the author suggests amendments and finally makes a circumscribed plea for voluntary physician-assisted suicide.

AUTHOR BIOGRAPHY
Raphael Cohen-Almagor has been the Fulbright-Yitzhak Rabin Scholar and a visiting professor at UCLA School of Law and department of communication. He is chairperson of library and information studies at the University of Haifa, and the author of The Boundaries of Liberty and Tolerance, Speech, Media and Ethics: The Limits of Free Expression, and Euthanasia in the Netherlands.
TABLE OF CONTENTS