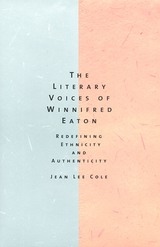 Winnifred Eaton, better known under her Japanese-sounding pseudonym, Onoto Watanna, published over a dozen novels and hundreds of short stories, articles, and screenplays during the first half of the twentieth century. However, by the time of her death in 1954, most of her books were out of print.

Eaton attempted to disguise her Chinese heritage by writing under a hypothetically Japanese pen name. In legal documents, she usually claimed a "white" racial identity. In her fiction, Eaton portrayed Japanese, Chinese, Irish, and American characters, relying on the accepted stereotypes of the day. Jean Lee Cole shows that the many voices Eaton adopted show her deep preoccupations with "American" identity as a whole. The author attempts to reconcile all of these "voices," examining how Eaton survived in a climate hostile to minority writers in the early twentieth century, and how her seemingly anomalous works conjoin Asian American and American literary history.
AUTHOR BIOGRAPHY
Jean Lee Cole is an assistant professor of English at Loyola College in Baltimore, Maryland. She is the coeditor (with Maureen Honey) of "Madame Butterfly" by John Luther Long and "A Japanese Nightingale" by Onoto Watanna (Winnifred Eaton): Two Orientalist Texts (Rutgers University Press).