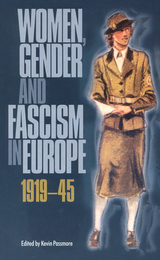 What attracts women to far-right movements that appear to denigrate their rights?

This question has vexed feminist scholars for decades and has led to many lively debates in the academy. In this context, during the 1980s, the study of women, gender, and fascism in twentieth-century Europe took off, pioneered by historians such as Claudia Koonz and Victoria de Grazia. This volume makes an exciting contribution to the evolving body of work based upon these earlier studies, bringing emerging scholarship on Central and Eastern Europe alongside that of more established Western European historiography on the topic.

Women, Gender and Fascism in Europe, 191945 features fourteen essays covering Serbia, Croatia, Yugoslavia, Romania, Hungary, Latvia, and Poland in addition to Germany, Italy, France, Spain, and Britain, and a conclusion that pulls together a European-wide perspective. As a whole, the volume provides a compelling comparative examination of this important topic through current research, literature reviews, and dialogue with existing debates. The essays cast new light on questions such as womens responsibility for the collapse of democracy in interwar Europe, the interaction between the womens movement and the extreme right, and the relationships between conceptions of national identity and gender.

Kevin Passmore is a lecturer in history at Cardiff University and author of Fascism: A Very Short Introduction.