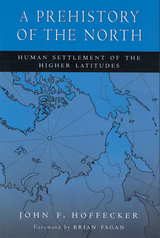 Early humans did not simply drift northward from their African origins as their abilities to cope with cooler climates evolved. The initial settlement of places like Europe and northern Asia, as well as the later movement into the Arctic and the Americas, actually occurred in relatively rapid bursts of expansion. A Prehistory of the North is the first full-length study to tell the complex story, spanning almost two million years, of how humans inhabited some of the coldest places on earth.

In an account rich with illustrations, John Hoffecker traces the history of anatomical adaptations, diet modifications, and technological developments, such as clothing and shelter, which allowed humans the continued ability to push the boundaries of their habitation. The book concludes by showing how in the last few thousand years, peoples living in the circumpolar zone—with the exception of western and central Siberia—developed a thriving maritime economy.

Written in nontechnical language, A Prehistory of the North provides compelling new insights and valuable information for professionals and students.

AUTHOR BIOGRAPHY
John F. Hoffecker is a Fellow of the Institute of Arctic and Alpine Research at the University of Colorado in Boulder and is the author of Desolate Landscapes: Ice Age Settlement in Eastern Europe (Rutgers University Press).
TABLE OF CONTENTS