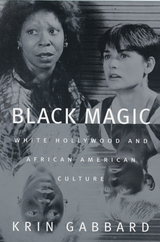 As Krin Gabbard brilliantly reveals in Black Magic, we duly recognize the cultural heritage of African Americans in literature, music, and art, but there is a disturbing pattern in the roles that blacks are asked to play-particularly in the movies. Many recent films, including The Matrix, Fargo, The Green Mile, Ghost, The Talented Mr. Ripley, Pleasantville, The Bridges of Madison County, and Crumb, reveal a fascination with black music and sexuality even as they preserve the old racial hierarchies. Quite often the dependence on African American culture remains hidden-although it is almost perversely pervasive. In the final chapters of Black Magic, Gabbard looks at films by Robert Altman and Spike Lee that attempt to reverse many of these widespread trends.

AUTHOR BIOGRAPHY
Krin Gabbard is a professor of comparative literature and English at the State University of New York at Stony Brook. He is the author most recently of Jammin' at the Margins: Jazz and American Culture.
TABLE OF CONTENTS