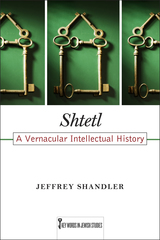 In Yiddish, shtetl simply means “town.” How does such an unassuming word come to loom so large in modern Jewish culture, with a proliferation of uses and connotations? By examining the meaning of shtetl, Jeffrey Shandler asks how Jewish life in provincial towns in Eastern Europe has become the subject of extensive creativity, memory, and scholarship from the early modern era in European history to the present.

In the post-Holocaust era, the shtetl looms large in public culture as the epitome of a bygone traditional Jewish communal life. People now encounter the Jewish history of these towns through an array of cultural practices, including fiction, documentary photography, film, memoirs, art, heritage tourism, and political activism. At the same time, the shtetl attracts growing scholarly interest, as historians, social scientists, literary critics, and others seek to understand both the complex reality of life in provincial towns and the nature of its wide-ranging remembrance.

Shtetl: A Vernacular Intellectual History traces the trajectory of writing about these towns—by Jews and non-Jews, residents and visitors, researchers, novelists, memoirists, journalists and others—to demonstrate how the Yiddish word for “town” emerged as a key word in Jewish culture and studies. Shandler proposes that the intellectual history of the shtetl is best approached as an exemplar of engaging Jewish vernacularity, and that the variable nature of this engagement, far from being a drawback, is central to the subject’s enduring interest.

JEFFREY SHANDLER is a professor of Jewish studies at Rutgers University. He is the author of While America Watches: Televising the Holocaust; Adventures in Yiddishland: Postvernacular Language and Culture; and Jews, God, and Videotape: Religion and Media in America.

REVIEWS
"A sophisticated, erudite study. Shandler's new book focuses not so much on the Eastern European market town as on the changing ways in which Jews have employed it as 'social space to think with,' a ready-made idiom with which to address contemporary concerns."
— Jewish Review of Books

"Shandler's book is a tour de force. It will be a landmark addition to our understanding of modern Jewish culture."
— Samuel D. Kassow, Trinity College

"I read this book with more pleasure than many books with which I agree wholeheartedly. Without a doubt, Jeffrey Shandler is an extraordinarily talented scholar whose views deserve our time and consideration."
— Slavic and East European Journal