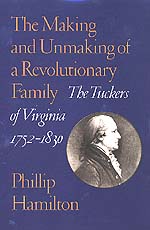 In mid-April 1814, the Virginia congressman John Randolph of Roanoke had reason to brood over his family's decline since the American Revolution. The once-sumptuous world of the Virginia gentry was vanishing, its kinship ties crumbling along with its mansions, crushed by democratic leveling at home and a strong federal government in Washington, D.C. Looking back in an effort to grasp the changes around him, Randolph fixated on his stepfather and onetime guardian, St. George Tucker.

The son of a wealthy Bermuda merchant, Tucker had studied law at the College of William and Mary, married well, and smuggled weapons and fought in the Virginia militia during the Revolution. Quickly grasping the significant changes--political democratization, market change, and westward expansion--that the War for Independence had brought, changes that undermined the power of the gentry, Tucker took the atypical step of selling his plantations and urging his children to pursue careers in learned professions such as law. Tucker's stepson John Randolph bitterly disagreed, precipitating a painful break between the two men that illuminates the transformations that swept Virginia in the late eighteenth and early nineteenth centuries.

Drawing upon an extraordinary archive of private letters, journals, and other manuscript materials, Phillip Hamilton illustrates how two generations of a colorful and influential family adapted to social upheaval. He finds that the Tuckers eventually rejected wider family connections and turned instead to nuclear kin. They also abandoned the liberal principles and enlightened rationalism of the Revolution for a romanticism girded by deep social conservatism. The Making and Unmaking of a Revolutionary Family reveals the complex process by which the world of Washington and Jefferson evolved into the antebellum society of Edmund Ruffin and Thomas Dew.