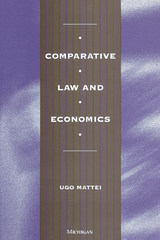 The comparative study of law and the institutions of law have enriched our understanding of the role law plays in our society by comparing law and legal institutions in different countries, but we have lacked a strong theoretical structure. Scholars studying the role of law in society by applying economic theories have offered a parsimonious theoretical structure with which to understand the relationship between law and society but have tended to focus only on American legal issues. Ugo Mattei joins insights from both areas of scholarship in a productive relationship that furthers our understanding of why societies adopt different laws and why some societies share similar laws.
Mattei shows how concepts from economics can be applied to the study of comparative law. He then applies the concepts to several significant problems in comparative law, including the history and sources of law, differences between civil and common law systems, and the reasons for legal change and the movement of law from one country to another. He looks at specific problems in property, contracts, and trust law. Finally he uses the insights he has developed to understand the issues involved in changing law in developing countries and in formerly socialist countries.
This book will be of interest to scholars of law, economics, and development, as well as those interested in transformation in formerly communist states.
Ugo Mattei is Alfred and Hanna Fromm Professor of International and Comparative Law, Hastings College of Law, University of California; and Professor of Civil Law, University of Trento.
AUTHOR BIOGRAPHY