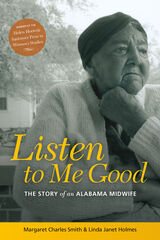 Margaret Charles Smith, a ninety-one-year-old Alabama midwife, has thousands of birthing stories to tell. Sifting through nearly five decades of providing care for women in rural Greene County, she relates the tales that capture the life-and-death struggle of the birthing experience and the traditions, pharmacopeia, and spiritual attitudes that influenced her practice. She debunks images of the complacent southern “granny” midwife and honors the determination, talent, and complexity of midwifery.

Fascinating to read, this book is part of the new genre of writing that recognizes the credibility of midwives who have emerged from their own communities and were educated through apprenticeship and personal experience. Past descriptions of southern black midwives have tended to denigrate their work in comparison with professional established medicine. Believed to be the oldest living (though retired) traditional African American midwife in Alabama, Smith is one of the few who can recount old-time birthing ways. Despite claims that midwives contributed to high infant mortality rates, Smith’s story emphasizes midwives' successes in facing medical challenges and emergencies.

AUTHOR BIOGRAPHY
Margaret Charles Smith has spoken extensively about her years as a midwife at national midwifery conferences, folk festivals, and women’s health programs. In 1985 the Eutaw City Council proclaimed May 11th “Margaret Charles Smith Day,” and she became the first black person to receive the keys to the city.

Linda Janet Holmes, a former journalist, currently works for the New Jersey Department of Health, Division of Family Health Services, in Trenton.
REVIEWS
“Smith’s dedication, strong religious faith, and dignity are evident throughout this tribute to a tradition of self-care and community support. This fascinating oral history will interest students of the health sciences, women’s studies, and history, as well as general readers. Highly recommended for all collections.” —Library Journal