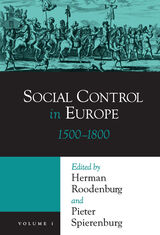 BUY
SOCIAL CONTROL IN EUROPE V1: 1500-1800
by HERMAN ROODENBURG and PIETER SPIERENBURG
The Ohio State University Press, 2004
Cloth: 978-0-8142-0968-4
eISBN: 978-0-8142-7311-1
This first volume of a two-volume collection of essays provides a comprehensive examination of the idea of social control in the history of Europe. The uniqueness of these volumes lies in two main areas. First, the contributors compare methods of social control on many levels, from police to shaming, church to guilds. Second, they look at these formal and informal institutions as two-way processes. Unlike many studies of social control in the past, the scholars here examine how individuals and groups that are being controlled necessarily participate in and shape the manner in which they are regulated. Hardly passive victims of discipline and control, these folks instead claimed agency in that process, accepting and resisting—and thus molding—the controls under which they functioned. The essays in this volume focus on the interplay of ecclesiastical institutions and the emerging states, examining discipline from a bottom-up perspective.
AUTHOR BIOGRAPHY
Herman Roodenburg is a senior researcher at the Meertens Institute, The Netherlands, and professor of cultural history at the Catholic University of Leuven, Belgium.
Pieter Spierenburg is professor of history at Erasmus University, The Netherlands.