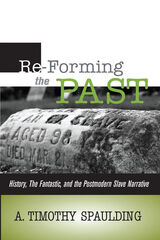 The slave experience was a defining one in American history, and not surprisingly, has been a significant and powerful trope in African American literature.  In Re-Forming the Past, A. Timothy Spaulding examines contemporary revisions of slave narratives that use elements of the fantastic to redefine the historical and literary constructions of American slavery. In their rejection of mimetic representation and traditional historiography, postmodern slave narratives such as Ishmael Reed’s Flight to Canada, Octavia Butler’s Kindred, Toni Morrison’s Beloved, Charles Johnson’s Ox Herding Tale and Middle Passage, Jewelle Gomez’s The Gilda Stories, and Samuel Delaney’s Stars in My Pocket like Grains of Sand set out to counter the usual slave narrative’s reliance on realism and objectivity by creating alternative histories based on subjective, fantastic, and non-realistic representations of slavery. As these texts critique traditional conceptions of history, identity, and aesthetic form, they simultaneously re-invest these concepts with a political agency that harkens back to the original project of the 19th-century slave narratives.

In their rejection of mimetic representation and traditional historiography, Spaulding contextualizes postmodern slave narrative. By addressing both literary and popular African American texts, Re-Forming the Past expands discussions of both the African American literary tradition and postmodern culture.
AUTHOR BIOGRAPHY
A. Timothy Spaulding is associate professor of English at the University of Delaware in  Newark, Delaware.

REVIEWS
“Spaulding’s book provides a postmodern approach to reading and understanding the slave narrative. The subject matter is timely, ripe for analysis and Spaulding’s discussions about time, history, and the destabilization of racial indentity are provocative. Spaulding enriches our understanding of conventional literary categories. Re-Forming the Past is a timely contribution to African American literature and an overdue contribution to postmodern studies.” —Valerie Lee, The Ohio State University


“Re-Forming the Past presents a crucial contribution to continuing debates about the legacy of the slave narrative in American fiction. Spaulding’s book will be of considerable value to scholars and general readers with interest in African American history and literature, postmodernism, metafiction, and cultural studies.” —Aldon Nielsen, Pennsylvania State University