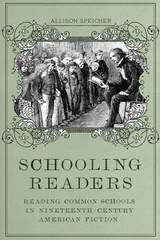 Despite hailing from different regions with diverse histories and cultures, authors in all parts of the US produced remarkably similar school fictions. These stories, rather than offering idealized depictions of earnest schoolchildren in humble, rough-hewn schoolhouses, expose common schools as sites of both community bonding and social strife. These stories, Speicher shows, reflect surprisingly contemporary problems like school violence and apprehensions about assessments.

In four insightful sections, Speicher illuminates the plotlines that define the common school narrative: school exhibitions, in which common schools were opened to the public for a day of student performances; romances between teachers and students; violence against teachers; and teachers adopting their students. She offers rich examples from one hundred and thirty school stories by well-known authors such as Mark Twain, Bret Harte, Catharine Maria Sedgwick, and Edward Eggleston, as well as by educational reform pioneers such as C. W. Bardeen and long-forgotten contributors to nineteenth-century magazines.

By reading these fictions alongside the discourse of reformers like Horace Mann, Speicher illustrates the utility of fiction for uncovering the diverse reactions nineteenth-century Americans had to the expansion of public education as well as the role fiction played in shaping these responses. Throughout she maintains a dual focus, drawing on both literary and educational history, thereby offering much of value to those interested in either field.
AUTHOR BIOGRAPHY
Allison Speicher is an assistant professor of English, teaching nineteenth-century American literature and children's literature at Eastern Connecticut State University.
TABLE OF CONTENTS
Contents
Acknowledgments
Introduction
1. Pedagogues and Performers
2. Combatants and Collaborators
3. Teachers and Temptresses
4. Parents and Patrons
Conclusion
Appendix: Archive of Common School Narratives
Notes
Bibliography
Index