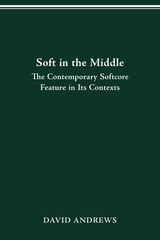 As the first survey of its kind, Soft in the Middle positions the contemporary softcore feature as a middlebrow form of pornography. This genre of film and video has been produced by a complex and often elusive industry situated in the ambiguous “middle” regions between hardcore and Hollywood.
In meticulous detail, Soft in the Middle demonstrates that softcore’s under-the-radar success and pervasive cultural devaluation may be understood in terms of the “postfeminist” strategies employed by successive generations of producers and distributors, each intent on overcoming obstacles to the mainstream distribution of pornographic material. Softcore and its American precursors became more “feminized” and “female friendly” as their distribution widened, a process hastened in the 1980s by the industry’s transition to private, non-theatrical modes of distribution and exhibition (e.g., home-video outlets and premium-cable networks like Cinemax). One of the byproducts of this development is that contemporary softcore has frequently resorted to what are arguably anti-male or “misandristic” attitudes and depictions. Clearly, the genre challenges traditional assumptions about pornography, including those held by feminists on both sides of “the porn debates.”

Drawing on original industrial research, extensive sampling, and wide-ranging scholarship, Soft in the Middle offers a nuanced look at a discreetly indecent genre whose central commodity has always been female nudity. The book examines the genre’s history, describes its deflationary trajectory, and differentiates the reading patterns of its disparate audiences, including “cult” critics and feminist critics. Naturally, the book also considers the genre’s formal and ideological conventions, surveying its most exemplary subgenres, styles, and motifs—and lavishing particular attention on its most influential studios, directors, and texts.
AUTHOR BIOGRAPHY
David Andrews has taught literature and film at a number of universities, including the State University of New York and the University of Illinois at Chicago.
REVIEWS
“Soft in the Middle is an important new reading of a neglected but hugely significant area of contemporary film culture: the softcore feature film. David Andrews combines exhaustive research into a relatively unmined seam of film history with an energetically witty and lucid style. Whether formulating definitions of the ‘middlebrow,’ or presenting models for understanding taste hierarchies, or grappling with judgments of ‘indecency,’ or exploring softcore’s uneasy relationship with feminist politics, Andrews sets his lively textual material squarely in the context of key debates in film studies today. Soft in the Middle is both eminently readable and historically detailed, tracking the highs and lows and prehistories of a prodigious film form, which Andrews shows to be both vulnerable and tenacious. This meticulous study of a significant strand of recent U.S. visual and sexual culture will appeal as much to the general reader and viewer of contemporary and cult cinema as it will to the specialist scholar. An outstanding achievement of analysis and scholarship, Soft in the Middle establishes David Andrews as an academic star writer in the making.”
—Linda Ruth Williams, Senior Lecturer in Film Studies, University of Southampton, UK, and author of The Erotic Thriller in Contemporary Cinema


“Soft in the Middle is highly original and compelling. Dave Andrews does for softcore what Linda Williams did for hardcore, what Janice Radway did for the romance novel, and what Eric Schaefer did for exploitation film. It is well-researched and beautifully written, a model of film and media scholarship.”
—Constance Penley, a founding editor of Camera Obscura: Feminism, Media, Cultural Studies