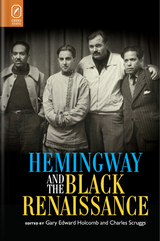 Hemingway and the Black Renaissance, edited by Gary Edward Holcomb and Charles Scruggs, explores a conspicuously overlooked topic: Hemingway’s wide-ranging influence on writers from the Harlem Renaissance to the present day. An observable who’s who of black writers—Ralph Ellison, James Baldwin, Langston Hughes, Claude McKay, Wallace Thurman, Chester Himes, Alex la Guma, Derek Walcott, Gayl Jones, and more—cite Hemingway as a vital influence. This inspiration extends from style, Hemingway’s minimalist art, to themes of isolation and loneliness, the dilemma of the expatriate, and the terrifying experience of living in a time of war. The relationship, nevertheless, was not unilateral, as in the case of Jean Toomer’s 1923 hybrid, short-story cycle Cane, which influenced Hemingway’s collage-like 1925 In Our Time.

Just as important as Hemingway’s influence, indeed, is the complex intertextuality, the multilateral conversation, between Hemingway and key black writers. The diverse praises by black writers for Hemingway in fact signify that the white author’s prose rises out of the same intensely American concerns that their own writings are formed on: the integrity of the human subject faced with social alienation, psychological violence, and psychic disillusionment. An understanding of this literary kinship ultimately initiates not only an appreciation of Hemingway’s stimulus but also a perception of an insistent black presence at the core of Hemingway’s writing.
AUTHOR BIOGRAPHY
Gary Edward Holcomb is associate professor of African American literature in the Americas at Ohio University in Athens, Ohio. Charles Scruggs is professor of literature at the University of Arizona in Tucson.