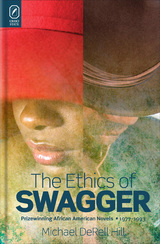 After World War II and well beyond the Black Arts Movement, African American novelists struggled with white literary expectations imposed upon them. Aesthetics as varied as New Criticism and Deconstruction fueled these struggles, and black writers—facing these struggles— experienced an ethical crisis. Analyzing prizewinning, creative fellowship, and artistic style, this book considers what factors ended that crisis.

The post–Civil Rights era produced the most accomplished group of novelists in black literary history. As these authors worked in an integrating society, they subjected white narrative techniques to the golden mean of black cultural mores. This exposure compelled the mainstream to acknowledge fresh talent and prodded American society to honor its democratic convictions. Shaping national dialogues about merit, award-winning novelists from 1977 to 1993, the Black Archivists, used swagger to alter the options for black art and citizenship.
AUTHOR BIOGRAPHY
Michael DeRell Hill is assistant professor of English and African American Studies at the University of Iowa.
REVIEWS
“Michael Hill assesses the prizewinning works of Ralph Ellison, Toni Morrison, Alice Walker, Gloria Naylor, David Bradley, John Edgar Wideman, and Ernest Gaines. While most works by these African American novelists have been looked at individually, or as certain obvious pairings, a study such as this one puts these works in dialogue with one another. This book is a provocative one that brings an underappreciated topic to light.” —Carol E. Henderson, professor of English and Chair of Black American Studies at the University of Delaware