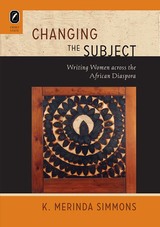 BUY
Changing the Subject: Writing Women across the African Diaspora
by K. Merinda Simmons
The Ohio State University Press, 2014
eISBN: 978-0-8142-7322-7
Paper: 978-0-8142-5292-5
In Changing the Subject: Writing Women across the African Diaspora, K. Merinda Simmons argues that, in first-person narratives about women of color, contexts of migration illuminate constructions of gender and labor. These constructions and migrations suggest that the oft-employed notion of “authenticity” is not as useful a classification as many feminist and postcolonial scholars have assumed. Instead of relying on so-called authentic feminist journeys and heroines for her analysis, Simmons calls for a self-reflexive scholarship that takes seriously the scholar’s own role in constructing the subject.
The starting point for this study is the nineteenth-century Caribbean narrative The History of Mary Prince (1831). Simmons puts Prince’s narrative in conversation with three twentieth-century novels: Zora Neale Hurston’s Their Eyes Were Watching God, Gloria Naylor’s Mama Day, and Maryse Condé’s I, Tituba, Black Witch of Salem. She incorporates autobiography theory to shift the critical focus from the object of study—slave histories—to the ways people talk about those histories and to the guiding interests of such discourses. In its reframing of women’s migration narratives, Simmons’s study unsettles theoretical certainties and disturbs the very notion of a cohesive diaspora.
AUTHOR BIOGRAPHY
K. Merinda Simmons is assistant professor of religious studies at the University of Alabama.