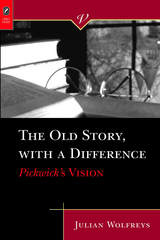 The Old Story, with a Difference: Pickwick’s Vision explores in radically different ways from most approaches to nineteenth-century studies the tropes and metaphors of vision in Dickens’ first novel, The Pickwick Papers. Julian Wolfreys provides a close reading of Dickens’ Pickwick Papers and argues that this novel is an exemplary text for the re-consideration of concepts such as literature, history, the novel, and the whole notion of Victorian studies. True to the purpose of the Victorian Critical Interventions Series, Wolfreys challenges scholars to rethink the use of a canonical text in Victorian literature.

Challenging the commonplaces of historicist criticism, and demonstrating the need for a return to close reading, The Old Story, with a Difference presents a reading of the novel grounded in the twinned rigors of materialist historiography and theoretical inflections tending toward attentiveness to epistemological and linguistic concerns. Through such an orientation, Wolfreys unpacks the relation between the tropes of visuality and matters of memory, history, and the necessity of fiction to bear witness to the cultures, past and present, from which literature becomes generated and which it mediates. In doing so, he situates an argument for rethinking Dickens’ novel as the inaugural novel of Victorian fiction par excellence, in that novel’s efforts to remain open to the traces of the past in particular ways.

The Old Story, with a Difference holds profound implications for the study not only of Dickens’ works but Victorian literature and culture in general. Provocative and inventive, this ambitious analysis will challenge, goad, and invite the reader to return to acts of materialist reading informed by ethical and ideological urgency, rather than relapsing into the commonplaces of humanist cliché.

REVIEWS
“Brilliant! Wolfreys sets out to reposition Pickwick for us and allow us to see it differently, have we but the eyes to see. In the process, he roams far and wide, always suggestively and usually delightfully, in wondering out loud how it is we do see, especially how we see the past.” —James Kincaid, author of Annoying the Victorians