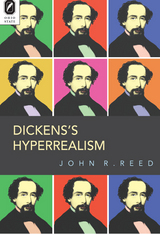 In Dickens’s Hyperrealism, John R. Reed examines certain features of Dickens’s style to demonstrate that the Inimitable consciously resisted what came to be known as realism in the genre of the novel. Dickens used some techniques associated with realism, such as description and metonymy, to subvert the purposes usually associated with it. Reed argues that Dickens used such devices as personification and present-tense narration, which are anathema to the realist approach. He asserts that Dickens preferred a heightened reality, not realism. And, unlike the realism which seeks to mask authorial control of how readers read his novels, Dickens wanted to demonstrate, first openly, and later in his career more subtly, his command over his narratives.

This book opens a new avenue for investigating Dickens’s mastery of his art and his awareness of its literary context. In addition, it reopens the whole issue of realism as a definition and examines the variety of genres that coexisted in the Victorian period.
AUTHOR BIOGRAPHY