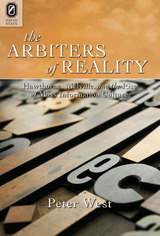 The Arbiters of Reality: Hawthorne, Melville, and the Rise of Mass Information Culture disrupts our critical sense of nineteenth-century American literature by examining the storytelling strategies of both Nathaniel Hawthorne and Herman Melville in light of an emerging information industry. Peter West reveals how these writers invoked telegraphic and penny press journalism, daguerreotypy, and moving panoramas in their fiction to claim for themselves a privileged access to a reality beyond the reach of a burgeoning mass audience.

Locating Hawthorne and Melville in vivid and overlooked contexts—the Salem Murder scandal of 1830, which transformed Hawthorne's quiet city into a media-manufactured spectacle, and Melville's New York City of 1846–47, where the American Telegraph was powerfully articulating a nation at war—West portrays the romance as a reactive, deeply rhetorical literary form and a rich historical artifact.

In the early twenty-first century, it has become a postmodern cliché to place the word “reality” in scare quotes. The Arbiters of Reality suggests that attending to the construction of the real in public life is more than simply a language of critique: it must also be understood as a specific kind of romantic self-invention.