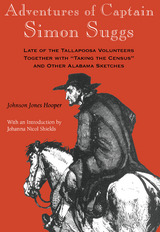 Adventures of Captain Simon Suggs: Late of the Tallapoosa Volunteers; Together with Taking the Census and Other Alabama Sketches
by Johnson Jones Hooper
introduction by Johanna Nicol Shields
University of Alabama Press, 1993
Paper: 978-0-8173-0706-6
eISBN: 978-0-8173-8915-4

Originally published in 1845, Adventures of Captain Simon Suggs is a series of sketches written in part to parody some the campaign literature of the era. The character, Simon Suggs, with his motto, “it is good to be shifty in a new country,” fully incarnates a backwoods version of the national archetypes now know as the confidence man, the grafter, the professional flim-flam artist supremely skilled in the arts by which a man gets along in the world. This classic volume of good humor is set in the rough-and-tumble world of frontier life and politics.

Johnson Jones Hooper (1815-1862), Alabama’s most celebrated antebellum author, was a lawyer and newspaperman, and at the time of his death, was Secretary of the Confederate Congress. His other works include Dog and Gun (1856), reprinted by The University of Alabama Press in 1992.

Johanna Nicol Shields is professor emerita of History at The University of Alabama in Huntsville.