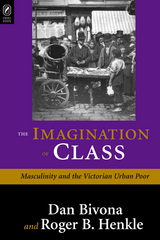 A fascinating meld of two scholars’ research and conclusions, The Imagination of Class is a synthetic journey through middle-class Victorian discourse posed by poverty in the midst of plenty—but not that alone. Rather Dan Bivona and Roger B. Henkle argue that the representation of abject poverty in the nineteenth century also displaced anxieties aroused by a variety of challenges to Victorian middle class masculinity. The book’s main argument, in fact, is that the male middle class imagery of urban poverty in the Victorian age presents a complex picture, one in which anxieties about competition, violence, class-based resentment, individuality, and the need to differentiate oneself from the scions of inherited wealth influence mightily the ways in which the urban poor are represented. In the representations themselves, the urban poor are alternately envisioned as sentimentalized (and feminized) victims who stimulate middle class affective response, as the objects of the professionalized discourses of the social sciences (and social services), and as an often hostile social force resistant to the “culturalizing,” taming processes of a maternalist social science.

Through carefully nuanced discussions of a variety of Victorian novelists, journalists, and sociological investigators (some well known, like Dickens, and others less well known, like Masterman and Greenwood), the book offers new insight into the role played by the imagination of the urban poor in the construction of Victorian middle class masculinity. Whereas many scholars have discussed the feminization of the poor, virtually no one has addressed how the poor have served as a site at which middle class men fashioned their own class and gender identity.
AUTHOR BIOGRAPHY
Dan Bivona is associate professor of English and Divisional Dean of Undergraduate Programs, College of Liberal Arts and Sciences at Arizona State University in Tempe. Roger B. Henkle was professor of English at Brown University and died in 1991.