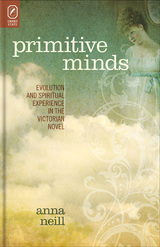 For twenty-first-century veterans of the evolution culture wars, Primitive Minds: Evolution and Spiritual Experience in the Victorian Novel, by Anna Neill, makes unlikely bedfellows of two Victorian “discoveries”: evolutionary theory and spiritualism. Victorian science did much to uncover the physical substratum of mystical or dreamy experience, tracing spiritual states to a lower, reflex, or more evolutionarily primitive stage of consciousness. Yet science’s pursuit of knowledge beyond sense-based evidence uncannily evoked powers associated with this primitive mind: the capacity to link events across space and time, to anticipate the future, to uncover elements of the forgotten past, and to see into the minds of others.
Neill does not ask how the Victorians explained away spiritual experience through physiological psychology, but instead explores how physical explanation interacted with dreamy content in Victorian accounts of the mind’s most exotic productions. This synthesis, she argues, was particularly acute in realist fiction, where, despite novelists’ willingness to trace the nervous origins of individual behavior and its social consequences, activity in hidden regions of the mind enabled levels of perception inaccessible to ordinary waking thought. The authors in her study include Charlotte Brontë, Charles Dickens, George Eliot, Arthur Conan Doyle, and Thomas Hardy.
AUTHOR BIOGRAPHY
Anna Neill is associate professor at the University of Kansas.