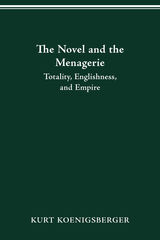 The first comprehensive account of the relation of collections of imperial beasts to narrative practices in England, The Novel and the Menagerie explores an array of imaginative responses to the empire as a dominant, shaping factor in English daily life. Kurt Koenigsberger argues that domestic English novels and collections of zoological exotica (especially zoos, circuses, traveling menageries, and colonial and imperial exhibitions) share important aesthetic strategies and cultural logics: novels about English daily life and displays featuring collections of exotic animals both strive to relate Englishness to a larger empire conceived as an integrated whole.

Koenigsberger’s investigations range from readings of novels by authors such as Charles Dickens, Virginia Woolf, Salman Rushdie, and Angela Carter to analyses of ballads, handbills, broadsides, and memoirs of showmen. Attending closely to the collective English practices of imagining and delineating the empire as a whole, The Novel and the Menagerie works at the juncture of literary criticism, colonial discourse studies, and cultural analysis to historicize the notion of totality in the theory and practice of the English novel. In exploring the shapes of the novel in England and of the English institutions that collected exotic animals, it offers fresh readings of familiar literary texts and opens up new ways of understanding the character of imperial Englishness across the nineteenth and twentieth centuries.
AUTHOR BIOGRAPHY
Kurt Koenigsberger is associate professor of English and Director of Composition at Case Western Reserve University, and Associate Director of the Society for Critical Exchange.
TABLE OF CONTENTS