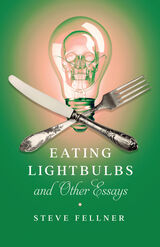 In Eating Lightbulbs and Other Essays, Steve Fellner traces the seriocomic absurdities of his own mind and its obsessions with family, mental illness, film, poetry, and gay sex. His search for love finds its outlets and objects wherever it can: in an imaginary 1970s Cineplex movie theatre, at a baby shower, or in a co-ed sexual abuse support group; via a letter penned to the ghost of an environmental activist who killed himself; or in the form of the AIDS quilt, lava lamps, amoebas, and a famous queer poet who didn’t know he existed. As he charts the inherently flawed ways he—and we—live and love, Fellner is always ready to subvert victim narratives even if he has to commit a few (or more than a few) acts of betrayal along the way. Unflinching and sidelong, laugh-out-loud funny, and as sharp and unpredictable as shards of fine glass, these essays look straight at the moments in life most of us would rather forget.

AUTHOR BIOGRAPHY
Steve Fellner is Professor of Creative Writing at SUNY Brockport. He is the author two books of poetry and a memoir, All Screwed Up. His essays have appeared in Brevity, Mississippi Review, The Normal School, North American Review, The Sun, and Mid-American Review, among others.
REVIEWS
“In this moving collection, Steve Fellner spins fascinating fragments like a kaleidoscope, always surprising us. He showcases a profound love for the essay as he displays a Sedaris-like humor while also tracing the history of his darkest moments.” —Jill Talbot, author of The Way We Weren’t: A Memoir


“Oh god, this book. A wild mouse, a whoopy cushion, a threnody, a meme, a tsunami, a side stitch, a teeth-kick, a heart of ouch, and whoa and bunnies. It’s ‘little fragments of eternity’ and ‘desire of any sort makes me dizzy,’ says the author, who adds: ‘The best way I knew how to write someone a love letter was to write a book.’ I got my love letter, Reader. Go get yours.” —M. Seaton, author of Undersea

Self-Portrait as a 1970s Cineplex Movie Theatre (An Abecedarian)

How to Survive a Baby Shower

A Letter to David Buckel

Two Truths and a Lie

“I see flies, I see mosquitos, but I have never seen a gay man.”

Are You There Judy? It’s Me, Steve.

Self-Portrait as a 1980s Cineplex Movie Theatre (An Abecedarian)

Ten Anecdotes about the Destruction of Books

On Love, Sex, and Thom Gunn

My mother is suffering from uterine cancer and all I can think about is the ’80s.

On Marxism, My Mother’s Body, and the State of Creative Nonfiction

Deleted Scenes from My Unpublished Memoir